July 13, 2020
I added 4 more stands of Marines to my Emperors Children Detachment, this time using the new Affray squad sculpts from Vanguard Miniatures. The new sculpts are superb, far superior to the older ones. It's also a lot easier to paint the shoulder trim, now that it is sculpted on! 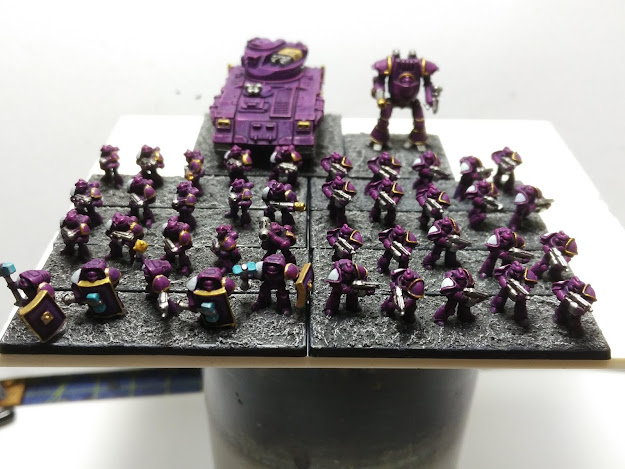 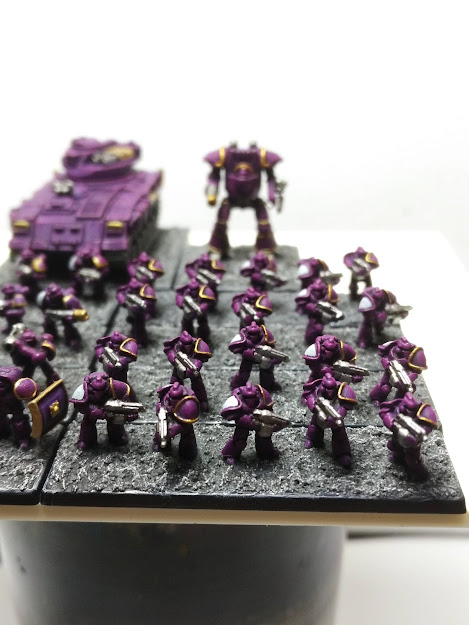 Just waiting on the heavy weapons to be released so I can get to adding another batch!
After posting these to around some of the forums & groups, a couple of people have asked how I did the basing. Rather than type it up each time, I thought I'd be lazy and type up the recipe here. It's extremely cheap to make, coming in at around €0.84 a pot of 24ml (Much cheaper than the Games workshop Astrogranite at €6.30 for the same volume of 24ml!)

It does take a fair long while to dry, it's not as quick as the store brought stuff, but I've found it to be near on indestructible once dry and it will dry no matter how thick you goop it on- its great for covering the gaps between the model and the base.

But it's mostly the price point is good for me (more money for more insane amounts of minis) & I like the DIY-ness to mixing up a new batch every now and then.

My recipe is pretty much this: Coarse texture Gel from Reeves
I get mine from the local art shop, it's less than €10, but as a mature student I take advantage of my student discount and get it for a lot, lot less. 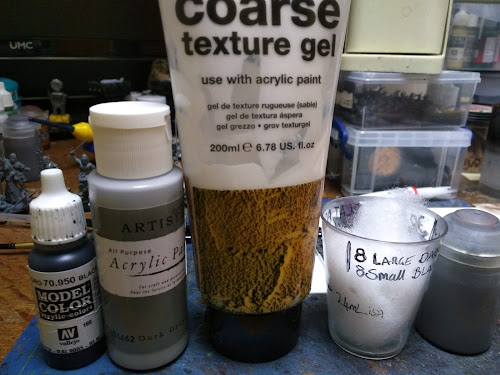 So the mix is roughly about:
It probably works in around the same price as the huge jars of Vallejo basing pastes, just with more effort, but making my own I can tweak the colours, I've used a bunch of different colours from the grey here I use most of the time, to Mars reds and my mud browns (Essential Skaven & Death Korps mud product!).

The good stuff about my own mix is that the colour is nice and strong, I've yet to have to go back and paint over any of the bases (Though the downside is you have to be bloody careful when putting it on, as it will stain the model almost instantly, I keep a wet brush on standby for accidents but I've found the colour transfer can be almost immediate!) and the fact that you can use it to fill the gaps between the feet and the base, which will still dry at this thickness. I tend to leave it over night to dry just to be sure!

Then its just a wash with black wash (massively thinned down, I just want to add some variation to the colour not darken it, though I've had some good results with a heavy brown wash too) then a light drybrush with an off white. I use one of the GW drypaints, I think they work rather well and I find white paint can look a bit too stark!
6mm sci-fi Emperors Children Epic 30k Epic 40k painting guides Tutorial vanguard miniatures